There are certain things that people will never cease to debate: 1) Is Chicago deep dish really pizza? 2) Who is the best heavy metal band of all time? 3) What is the first house music record? 4) What is the best Digital Audio Workstation (DAW)?

If you want to know the answers — or at least my answers — read until the end!

In all fairness I left out the most important part of the title which should read:

Why Digital Performer Is The Best DAW...For Me.

As Chase Jarvis said about cameras: "The best camera is the one that's with you," the best DAW is the one you have and use.

tl:dr; The best DAW is the one you have and use the most.

I started producing my own music on computer in 1991, after receiving a brand new Apple Macintosh IIci as a college graduation gift. With the requisite printer, 200MB hard drive (yes, you read that correctly), 1MB RAM, and floppy drive, that machine cost nearly $5,000 (thanks Dad) thirty years ago. That machine served me well and powered my first forays into digital music and graphics. Nevertheless, there is always a little tinge of regret when I realize what $5,000 in Apple stock purchased then would be worth today. But that is a story for another post.

In the early 1990s, there wasn't much choice in the way of software to create music on a Macintosh: either Opcode's Vision or Mark of the Unicorn's Performer were just about it. Thinking back, one of MOTU's selling points was they had sophisticated music notation software built in. I thought if I ever need to print out a score for real musicians, I might need that so I purchased my first copy of their flagship software. From there I was going to take the world by storm with my Korg M1 and Boss Doctor Rhythm DR-220 drum machine, or something. 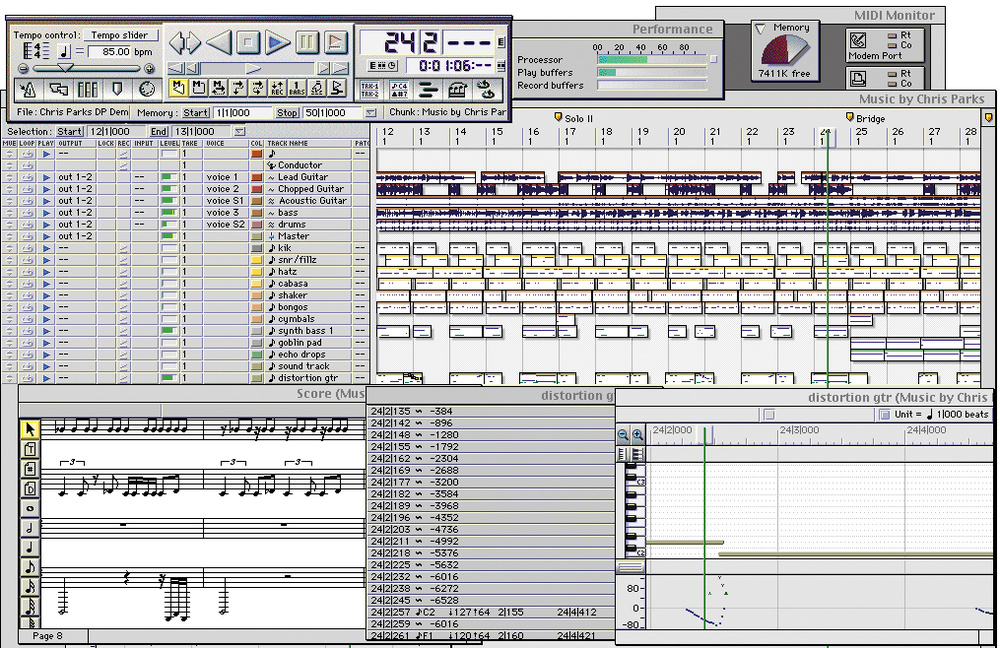 When I started with Perfomer/Digital Performer there already was a group of dedicated users and I quickly joined the MOTU-mac email list. Mind you, this was before any social media and email lists were very popular at the time. It was a great way to see what other people were asking while studio and mastering professionals who were using Digital Performer would chime in with answers and tips. From MOTU-mac I learned tons of customizations, key commands, and workflow enhancements that I use to this day.

By the late 1990s, ProTools emerged as the major player for computer-based audio production and the digital music (re: MIDI) landscape exploded with Steinberg's Cubase (and VST plugins), eMagic's Logic (PC only). Yet, Digital Performer kept chugging along, with each new version building on the version before by adding new features and making established features more and more solid.

The statement "It Just Works" could be more apt for MOTU's Digital Performer during the 1990s. While my PC buddies were often caught in driver update hell when new versions of their music software were released, every new version of Digital Performer was super solid and worked without a hitch on day one. Back in those days, with each upgrade of DP you got a physical copy of the floppy disk, and then later the cd along with the printed manual. DP's manual was always extremely well written and useful which made it an integral part of the software.

The 2000s saw new players like Ableton and their Live sequencer enter the arena, along with now established players like ProTools adding enhanced MIDI support. The other major event during this time was Apple's acquisition of eMagic which brought Logic over to the Mac. I remember many people on the MOTU-mac list deriding this decision and were hoping that Apple would buy MOTU instead but Apple's move made perfect sense: buying eMagic meant that all Logic users would now have to purchase new Apple hardware. MOTU's Digital Performer was already Mac-only at the time so there wasn't much upside for Apple in purchasing MOTU. In the end, I'm glad MOTU was able to stay independent and it seems like their dedicated fans have stuck with them (including me). Apple also released the Audio Unit plugin format in 2001. This, combined with the eMagic purchase led to not only an overhaul of Logic, but GarageBand being included as an entry-level DAW with every Mac. The democratization of music software was in full force.

When Ableton's Live was released in the early 2000s, it's instant loop features and a ton of built-in sounds were a step ahead of the now-traditional DAW. Having a DAW that was electronic-music focused like Live seem to resonate with the dance music community and thus Live became the preeminent DAW for younger music creators and djs alike by 2010.

The overarching theme for DAWs during the 2010s was feature parity. While earlier versions of DAWs each had their own strengths and specialties, by 2020 DAWs now seemed to all have pretty much the same feature set: beat detection, time stretching, auto tuning, audio editing, MIDI + audio, the list goes on.

All that said, Digital Performer still has some features that other DAWs don't like Chunks which allow you to combine multiple sequences in the same project. This is used often for live performances so you can cue up the next "song" just like a sample. I'll be using this if I ever perform live.

As of this year, I have been using Digital Performer for 30 years! There's no other software on my machine that I can say that about. And, I'm still using some of the key commands and workflows I learned so many years ago from a humble email list. When I'm working in DP I don't even have to think anymore, I can just focus on creating which is a beautiful place to be.

Over the years, I've worked with Logic, Ableton, ProTools, and even newer programs like ORCA but I keep going back to my trusty Digital Performer. Why? DP is comfortable and I know my way around it. Could I use another DAW and get similar results? Probably. But why change now? The Future of Past DAWs

This post was not intended to be an exhaustive history of digital audio workstations, nor was I trying to convince anyone (especially you dear reader) to switch to Digital Performer. If you leave with one idea it is this: find what works for you and learn it as well as you can. With all the major DAWs offering so many features — and infinitely extendable with Audio Units or VST plugins — there has never been a better time to be a music creator.